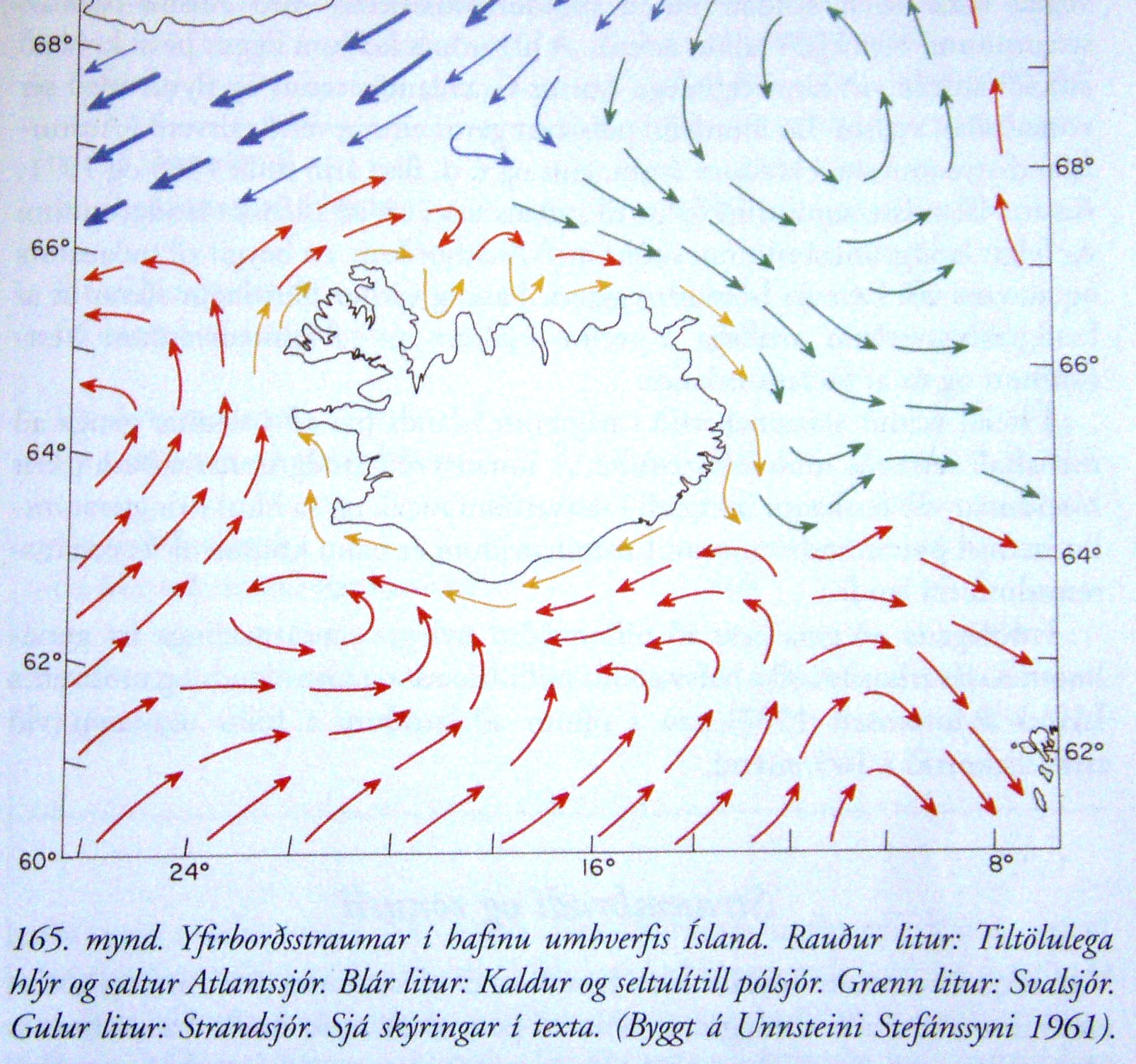 First let us look at a diagram of Iceland with lines and arrows showing the main currents. It is from the late Prof. Stefánsson (Univ. Iceland) textbook of oceanography. Then it is obvious why each one of the people paddling around Iceland took the clockwise direction. None the less Gudni Páll, who circumnavigated Iceland 2013, considered to paddle counter clockwise using the eddies! Certainly there is eddy effect some places and I have often seen foam lines running parallel to the coast few hundred meters off, the main current outside, the eddy inside it. Currents here are not strong, but in the long run and during long paddling days, it is better to stay with the current than against it. Normally the tidal current is at maximum clockwise 3 hours before HW but at the South Coast on the west side of Vatnajokull the current is at max clockwise at HW. The explanation is that the tidal ‘wave’ is coming from east along the South coast, no fjords are interfering and like any usual wave the forward speed is max close to its top, the tidal current is at max close to HW at the South Coast.

Big waves and swell happens all around Iceland and frequent storms add steep short wind waves to the swell in any combination and interference patterns. The special situation at the South Coast is that there you have no coves, islands, rocks or any other shelter to hide behind. The swell has all energy from the ocean and it breaks in one blow at the coast, or in a short range depending on the height of the wave and depth beneath. So if you have good training in surf landings, the weather is not bad or the wind mostly blowing from north it should be okay for you.

Weather forecast in Iceland is normally reliable, but sometimes lows change their track on short notice and the forecast should always be updated daily. Also there are local factors to consider. Northerly winds blowing down from Vatnajokull to sea may be violent and unexpected. The big sand deserts along the coast may also cause thermal up going air currents on sunny days, thus creating local wind from around which adds to or subtracts from the forecasted wind.

Another thing that normally follows sand deserts is blowing sand, which may make camping impossible or at least a frightening experience. This is to be expected in northerly winds, which are dry in this area and are otherwise welcomed by paddlers at the South Cost, if the offshore wind is to too strong.

Few additional facts can help. The bank at the South Coast has a step down 1-3 m high under the middle water level, you see it in calm sea at LW and in every wave when it hits, and you may see sand and stones being thrown up and the water becomes dark colored. If the kayak rolls a moment open there you may be in a big trouble and it takes long time to clean out the cockpit. Thus the landings and launch is best near high or low water.

The Glacier Rivers are different from the blue clean rivers. They bring huge amount of sand and mostly there is a reef at the east side of an estuary. This reef is not permanent and can disappear in bad weather, but I could use it in low water for easier landing on the leeside, but the strength of the outgoing river current is another factor to take into account. In one case I did this to land through rows of breaking swell, but after too long time for rest on the beach the water level was higher and there was no shelter anymore from the reef, which resulted in a violent pirouette landing after being driven backwards to the shore again.

River mouths may be fine escape route paddling through breaking waves and entering into calm current paddling close to the river bank – BUT beware of the Glacier Rivers. You can never count on their behavior, their bottom is mostly shallow, but if you step out your feet may sink in wet sand, kind of quicksand. If the kayak hits bottom and stops for a moment, it turns, the current washes away the sand on the leeside, the kayak falls on its side and fills with water. Maybe that’s a little exaggerated but I talk from experience. The final solution may be to hang on to your kayak, help the current to bring it downstream and eventually all the way back into the surf zone you came from.

One final warning built on a difficult experience of Gudni Páll and information from locals. There are hidden reefs running at some stretches parallel to the coast some 500 m outside the coastline. This is currently known to apply to the area south of Kirkjubæjarklaustur, between the rivers Skaftá and Kúdafljót and against Vestmannaeyjar. It happens probably at low water but possibly there may be some kind of underwater wave activity, when breaking waves form out there, unexpected surfacing. They may be violent and dangerous, not only capsizing the kayak, but hurting the paddler and ripping most things from deck.